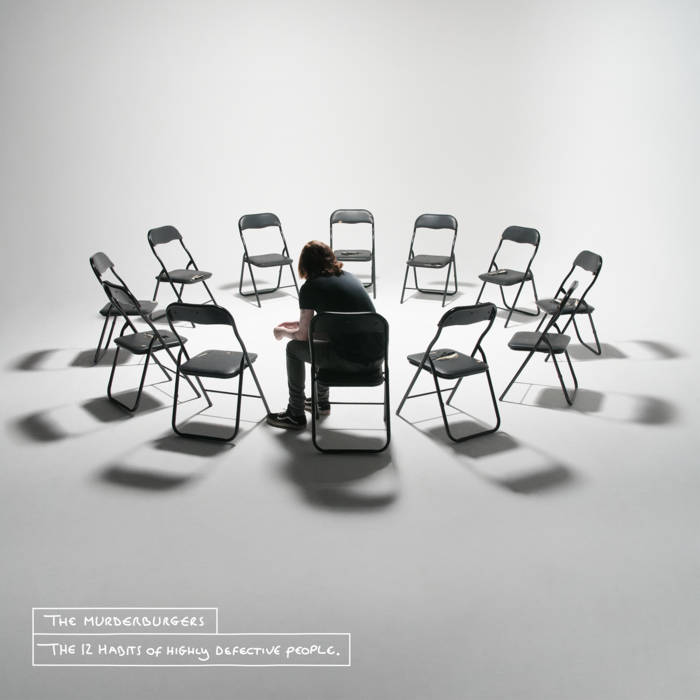 I love how difficult it is to properly pin down the Murderburgers sound. They are clearly and evidently pop punk with a capital P, but, at the same time, they totally have their own sound and way of doing things. Pop-punk is my genre (oh hello, this blog!), but even I can say that 95% of the genre is re-played or re-constituted (and most of that is probably stuff I enjoy). This 95% (I’m maybe being kind with the percentages) are either going through the motions or can easily be filed away (hello, song reference!). I dunno, I enjoy it, but it’s predictable; it’s disposable. It can be shelved under Ramonescore, Queers-core, Weasel-core, or whatever, but I love that The Murderburgers can’t be. There is clearly a classic underground ‘90s+’00s pop-punk influence running right through their sound, but it’s not pin down-able. There are some Weasel melodies, Ramones down-stroking, some Copyrights group vocals, some Houseboat misanthropy and some Dear Landlord-y lyrics. But also, not really. This is not a pop-punk recipe; these influences are running in the background, where this is overwhelmingly a Murderburgers album.

So, yeah, Dear Landlord. Fraser Murderburger has recorded 12 Habits in the US with Zach (lead vocalist from Dear Landlord), plus Intruder Yellow and Red from Masked Intruder and Adam Fletcher from The Copyrights. And it does show. The backing vocals and instrumentation is way slicker (which is probably partly down to the production values of Matt Allison) than anything previously heard by The Murderburgers. The guitars are crunchier, the vocals clearer and the melodies earworm-y. 12 Habits is catchy as fuck, the hooks are ubiquitous, but it is also fast-paced and intense. Some of the later songs, in particular, like “Lung Capacity” and “She’ll be Filed Away”, are relentless in their pace and intensity. Others are more composed and allow the vocals room to breathe (see the wonderful “December Ruined Everything”). Stylistically, this album takes the baton from the last album These Are Only Problems, runs with it and turns everything to max. In some ways, they are the same band as on How to Ruin Your Life; in others, they are pretty fucking different. Melodically more interesting; lyrically, more coherent: 12 Songs is a proper album, the kind they are saying bands don’t make any more.

Depression and anxiety are dealt with on 12 Habits, as have been on previous ‘Burgers releases, but now much coherently and brutally. From the moment, Fraser sings, “Another night of fight or flight mode/ Led me to the waterfront in Glasgow/ Sympathetic police found me there in tears/ And confiscated all my beers” on the catchy-as-fuck opener “Now That You’re Not at #21”, Fraser’s mental health is described with an articulation, depth and detail rarely heard in pop-punk. I guess 12 Habits is about a number of things, but for me, the thing that sticks everything together is not being able to let go of bad memories, of having flashbacks of past fuck-ups. This is best represented on album highlight “I Used to Hate That Life”:

“On a regular basis I seem to find that things I thought I’d left behind
Still stop me from getting out of bed in the morning
And keep me lying here until the sunlight disappears
Then all that’s left for me to do is start counting
Every single spring that digs into my spine and ribs
Until I give up because I’m too exhausted
Then turn the TV on, set the volume to 6 then turn and face the wall
And pretend that none of this bothers me at all”

When the back-up melodies for that last bit comes in, you can certainly hear the Masked Intruder influence. It is fucking beautiful. I guess the idea of burying yourself into TV to hide from your problems is not a new one (everyone has had a go, from Descendents to Green Day to Colleen Green), but the feeling is so euphoric in that moment. “Opium Bombs All Round” is probably the most straightforward Ramones-y  The ‘Burgers get on the album with those opening chords, before it morphs into a more ‘90s Descendents-y tune and then gives us the most pop-punk lyric of the year: “And that I’ve got it to thank/ As much as I’ve got it to blame/ For having enough band t-shirts to last me a lifetime/ But no money to get through the week”. 12 Habits gets a little bit Dream Homes at moments I guess (particularly on “She’ll Be Filed Away”, where structural as well as psychological barriers are touched upon), but overall, I would say that the album veers more towards more Banner Pilot, at least lyrically. The tales recalled here are of almosts, of fuck-ups, of romantic failure, of being within a finger’s touch of happiness before the cold of reality pulls you back into the bleak darkness. The winter is contrasted with summer, December with the Spring. That is pretty Banner Pilot, to me. Thematically, it may be like that, but stylistically, it is totally put through the ‘Burger filter: “But until that day, I know I’ll always be your pair of broken headphones on your loneliest ride home/And you’ll always be that song about a fresh start for which I can’t seem to write the ending.” (“December Ruined Everything”).

Oh, and then there’s “The Waves”. This is the song that The Murderburgers released months ago in anticipation of 12 Songs being released. As soon as I heard it, I was totally pulled in. It is one of the best pop-punk songs in recent years. I am not being melodramatic when I say it’s life-affirming stuff. Dripping with emotion, despair and hope simultaneously. I guess it is this feeling that reminds me of the romantic stylings of Banner Pilot. This is not just ‘my life is shit’ pop-punk. Well, it is; but there are also lines which put shit into perspective and offer some hope: “And I’ll appreciate the small amount of time that you decided to spend with me, instead of learning to hate you so that I can get this over with quickly” (This is a link back to the song from How to Ruin Your Life, “Learning to Hate You”, if you didn’t know). I love that second part to “December Ruined Everything”. It half-reads like the Lawrence Arms’ “100 Resolutions”, in that it is Fraser’s list of shit to do, that he may not be able to, but it’s also a rather mature acceptance of past fuck-ups that is all too hard to do. It reminds me of the recent Unlovables song “Worthwhile”, which recalls tales of a love not meant to last “still being worthwhile”. Final track “My Staple Diet of Rice, Vitamins and Painkillers” offers some hope alongside the despair, too, where perhaps the best we have is “trying not to think about nooses”, “trying not to think about chairs”, “trying to find time in between”. It is trying to live, in spite of everyone. I dunno, this album is essentially pop-punk perfection. I could talk about it for hours. A modern punk masterpiece to go alongside Dorkrockcockrod, Dream Homes and Collapser. To think a fairly bog-standard Ramonescore band morphed into this. Right, time to buy that band t-shirt I definitely cannot afford….Dear Christ to be born for this!