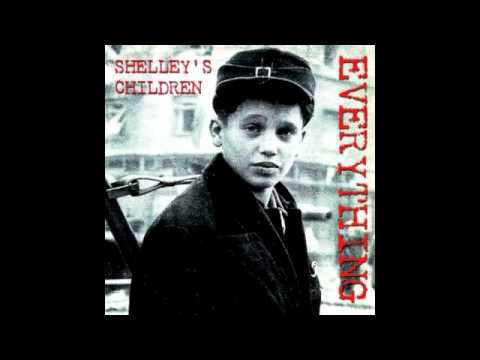 I gotta admit, I am sort of embarrassed. Until now in this column that is almost two years old, I still haven’t talked about a female fronted band. And except for Michelle Shirelle from the Steinways and Heather Tabor from Teen Idols, the bands have been all dudes. I could say that in my defense that half of my “Records of the Year” list is made up of female fronted bands, but that would just be a lame excuse. I figured it was time to do something about this. So the band I’m going to write about in this article will be the great British band Shelley’s Children. Shelley’s Children played catchy Pop Punk, sometimes with anarchic and feminist political lyrics, but also love songs and they also touched on personal topics. They also did a lot of covers, especially from the 50’s/60’s era, and that’s where they’ve taken most of their musical inspiration from. They are probably one of the greatest, hidden secrets that Punk or Pop music have to offer. Like so many bands, I first came aware of them from the Pop Punk Message Board and I was blown away right away, even if I waited two years (2012 to 2014) to order the Everything compilation. The band formed in Reading in the late 80’s and they had several members in their relatively short-lived career. The internet is quite slim when it comes to finding Shelley’s Children trivia, and most of the time the band members are only mentioned with first names (as well as in the album liner notes), so I hope the names are correct! Early on Tracey Curtis and Coral shared vocal duties, Greg and Neil played the guitar, Martyn Oakland played the bass and Wig played drums. Imogen Gunner joined the group later on violin, and later Steph joined on vocals together with Coral. After they split up in 1991 a couple of the band’s members formed, a new band called CuckooLand and Tracy Curtis released new material in the new millennium as a Folk singer and made the beautiful, satirical Folk Pop sensation, “The Vegan Police”, a piss-take aimed at the “vegan police” seen from a vegan point of view. She released the album Thoughts in the Dark in 2013.

This article will be a little different from earlier ones as Shelley’s Children never put out a full-length album, but two mini-albums (Everytown might be seen as an EP), so I’m going to write about both of them; The Mask of Anarchy and Everytown! The former was released in 1990; the latter in 1991 and both were released on the label Peasant’s Revolt, the band’s label, named after an uprising in England in the 14th century. The Mask of Anarchy is a reference to a pacifist poem written by Percy Bysshe Shelley written in the aftermath of the Peterloo Massacre in 1819. Shelley was married to the great Mary Shelley, who wrote the gothic masterpiece Frankenstein. The name of the record makes it obvious that the band name and their anarchic ideology has established my view that the band took their name after Shelley, being not the offspring of the Shelleys biologically, but ideologically. The album cover is black with a yellow mask that in many ways resembles a child-like image of the modern perception of the Frankenstein monster, making the cover symbolically honor both the band’s “parents”. A fun fact that I found is that the vinyl version of the record supposedly makes it so that the A-side should be played at 45 RPM and the B-side at 33 1/3. The Everytown cover is a picture of a little boy, probably another reference to the band name (children). The compilation Everything has the same cover as Everytown, and was released on Damage Goods in 2005 with demoes and goodies.

“The Mask of Anarchy”

Bonus: “Summerlove Sensation“: As a bonus track I’ve added their cover of “Summerlove Sensation” that appeared on a compilation released by Peasant’s revolt. The comp was called Greatest Hits: A Benefit for the Trafalgar Square Defence and supported the Trafalgar Square riots against the new Poll Tax introduced by Prime Minister Margaret Thatcher. The tax was a fixed tax payment every adult paid to their local authorities and replaced the old tax system where property owners paid tax rates by the value of their homes. The album cover is a written political statement rather than a picture or regular cover art. In spite of the album being severely politically charged, Shelley’s Children covered a Bay City Rollers song. The song is about a summer flirt and the cover is Pop music at its finest. The cover also shows that political activism and shameless, sugary Pop music are not mutually exclusive and destroys the boundary between anarchic, political Punk rock and mainstream Pop music without breaking into the mainstream itself. The compilation was also, like mentioned earlier, released on the Peasant’s Revolt label, and the riots themselves were often compared to the 14th century uprising. The actual Poll Tax were a disaster and eventually lead to the end of an over ten year Tory reign in the UK.

I’d like to say that I really recommend and encourage everyone to check this band out or get the Everything collection from somewhere, because it’s one of the most underrated and wonderful released that exist. From a female fronted band, I will in the next article talk about a band that females like, apparently: From Scene to Shining Scene by Chixdiggit.